Mantis are a hugely entertaining and fascinating group of insects that make easy to keep pets. Here are some interesting and often bizarre facts about them! 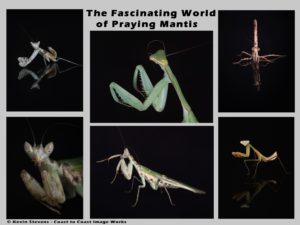 1. Their habit of sitting waiting for their prey with arms folded makes them look like they are praying – their name mantis comes from the Greek word ‘mantikos’ meaning prophet.

2. There are over 2400 known species of Mantis, mainly occurring in tropical and sub-tropical regions – but there are some that live in temperate climate such as the Chinese and European Mantis.

3. Mantis are closely related to cockroaches and are placed in an insect superorder Dictyoptera, that includes the order Blattodea and the order Mantodea.

4. Mantis can turn their heads in 180 degrees to look over their shoulders – a unique attribute within the insect world.

5. It is known that some Mantis species can, but don’t always, eat their male partner when mating. The unfortunate male is usually decapitated in one last whirlwind love affair. One study showed that decapitated male Mantis actually perform better while mating! Studies show decapitation and eating of the male by the female is not that common, at most an average of just less than half are cannibalised – many studies showing much less.

7. Evolutionary adaptations are common to ensure species survival, for example many species look like flowers to attract flying insects for them to eat. However there are some species that even change their appearance as the seasons change – for example species in Africa and Australia turn black after a moult at the end of the dry season. This is known as fire melanism and allows perfect camouflage after the commonly experienced fires due to the dry season.

8. Most Mantis have a method of hearing that only allows them to hear ultrasound. Their auditory chamber is in part of their thorax (body), and not in the head, and includes two tympana hearing organs. Some Mantis do not have hearing at all.

9. It is often thought Mantis are beneficial in eating many pest insects, but ecologically speaking it’s not all good news as they also eat many pollinator flying insects too. Nature seems to work well left to it’s own devices, and the balance when left alone works well – it has to be said man has unfortunately had more of a detrimental effect on pollinators than Mantis ever will.

10. Many adult Mantis have a very impressive defence display, they stand tall, spread their spikey forearms and fan out their wings. It makes the Mantis look much bigger and is quite an intimidating display.