Elegant geckos (sometimes known as Short-fingered gecko) are a small species of nocturnal geckos found in Norther Africa up into the Middle East – most found in captivity are originally from stock sourced in Egypt. They are a terrestrial species growing to around 6-8cm long. An interesting fact is within the taxonomy, the scientific name given is Stenodactylus sthenodactylus – the “h” shouldn’t be there, typos even existed when the species was originally described in 1823! 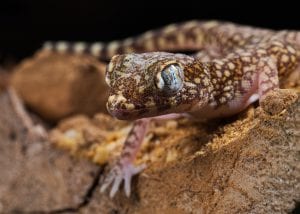 Being from a desert region, they need an arid set up to thrive in captivity – much like a Leopard gecko in many ways, just in miniature. A small vivarium suffices, make sure there are no small gaps between the glass or elsewhere. Floor covering needs to be sand (don’t worry too much about the vastly overdone claims of gut impaction, yes it can happen but generally due to incorrect husbandry – they do occur in sandy regions after all). Make the sand relatively deep, ideally with a varying degree of dampness the deeper the gecko digs – this is very natural. An easy way to provide an arid enclosure, but with localised damp areas is to provide a humid hide area. This can be a flat hide that is lifted each day and sprayed, or a purpose designed wet hide packed with a wet / damp substrate. I also like to spray the whole enclosure once a week too. This is vital for many desert species of reptiles and is far too often overlooked. There can be dry hides too, and a further range of décor and climbing décor. Don’t forget to provide a small water bowl, and replenish daily. 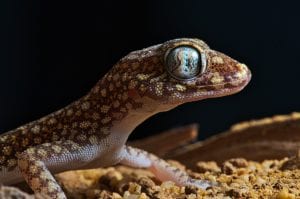 Heating and lighting can now be a very debatable topic, with no easy steadfast rules – there is merit to most views and all have pro’s and con’s. In the wild most terrestrial geckos shy away from the heat of the day – the temperatures soar quickly – activity levels are often limited to early morning / late evening. During the heat of the day they remain hidden, in their more humid, cooler hiding place. In the evening they heat themselves as soon as they come out of their hide by sitting on something that has been heated up by the days hot sun – usually a hot rock or compacted sand. For this reason they are often kept on heat mats under the sand – it works, but not very natural and has the added concern of over heating the heat mat. Another method would be to use an overhead heater (some use a light emitting heater, i.e. a bulb) with a flat rock or piece of slate underneath that heats up during the day. They do occasionally come out during the day as temperatures do not reach the dizzy heights they would experience in the middle of their summer. Temperatures of around 28-30C during the day is ideal, dropping to around 18-22 during the night, sometimes a slightly lower temperature during the winter will help breeding success. 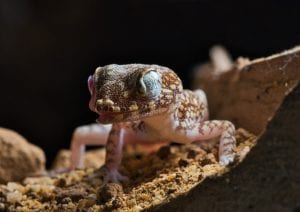 Lighting is one of the main areas, when keeping crepuscular species, that causes much debate. Many terrestrial geckos are successfully kept and bred in huge numbers in captivity without the provision of UVB. However the latest way of thinking is to provide UVB so they can get levels of UVB that they may, or may not require. This can be (it is argued) from bounced UVB into their hides, from reflected UVB from the moon, and exposure to UVB during the weaker suns rays during their daily activity periods. If the keeper prefers UVB we would recommend using a low level UVB tube, of around 6% UVB.

Feeding is much like most species of gecko – insects – but just tiny ones. They can easily eat 2nd instar crickets and the smaller commercially available insect livefood. This must be dusted with a good quality calcium / multi-vitamin supplement powder (but even then, there are debates on this topic too). Certainly at the very least we would recommend gutloading the livefood prior to offering them to your geckos.

This species is an easy to maintain gecko and doesn’t need much space at all. They are a fascinating little gecko species and are highly recommended – especially for those that like to maintain an eco-system style vivarium in their living room.