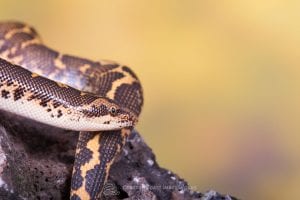 Sand boas are a group of boas that are strange in several ways, they are very small, they are fossorial (burrowing species) and are relatively unusual occurring in the “Old World”, most Boa species occur in the “New World” (“Old World” is Europe, Africa and / or Asia and “New World” is the Americas). This sub-species may not be recognised as a separate sub-species anymore, depending on author, as a traditionalist I still recognise it as Gongylophis colubrinus loveridgei, some herpetologists regard it as monotypic with geographic variation. It’s worth mentioning that even the view of Boas in the “New World” and Pythons in the “New World” is also regarded as traditionalist – this author is guilty as charged.

Kenyan Sand boas do not grow the large size of their relatives elsewhere, females around 60-90cm maximum, males much smaller. For this reason, they are well suited to captivity as they do not require a large vivarium – a maximum size would be around 90cm for a large female. 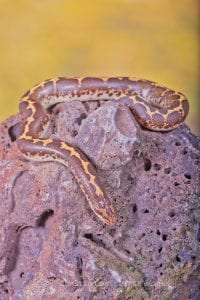 In the past I have kept and bred this species many times and kept them in a manner that is currently regarded as not being the most suitable. I used underfloor heating all those years ago, nowadays I would be more likely to use an overhead ceramic heater, although many keepers still successfully use underfloor heating for this species. Both methods would require a form of temperature control, a good quality thermostat, set at around 28-30C in the warm end of the vivarium. Be very careful with underfloor heating as heat build up in substrates is a very real risk, which can result in burns to the snake, or worse still a fire. A layer of a substrate such as ProRep Bio Life Desert to a depth of around 5-10cm (only with an overhead ceramic heater, substrates must be shallower to avoid heat build up when using underfloor heating) is ideal, allowing natural temperature regulation “underground”. Lighting hasn’t traditional been regarded as necessary, however if the keeper subscribes to the modern way of thinking (virtually all living creatures benefit from light) a good choice would be an Arcadia Shadedweller T5 tube. Provide a shallow water bowl and some flat pieces of slate on the top of the substrate. Spot clean daily; removing any faecal matter and shed skin – strip down completely, renewing the substrate around every four to eight weeks. Always use disinfectants suitable for reptiles. 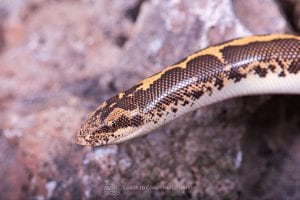 As an adult feeding can be sporadic, especially for males. I would attempt feeding once every seven to ten days. Be careful, adult females can sometimes be prone to over feeding given the chance with resulting obesity. Frozen (defrosted) rodents are generally eaten with vigour, just drag the rodent across the top of the substrate using a set of “safe” tweezers (I find the bamboo tweezers are safer than stainless steel should the snake accidently bite them instead of the rodent).

An enjoyable species to keep, with unusual behaviour and activity. They are often overlooked by keepers as they are disregarded due to being hidden under the substrate. I’ve never fully subscribed to this view, as many snakes hide consistently, to my eyes there isn’t much difference to being under a hide, or under substrate.