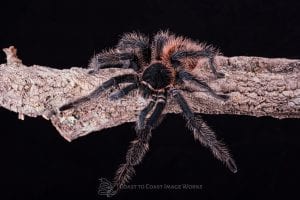 Salmon Pink tarantulas are regarded as the third biggest tarantula in the world and are an impressive spider. Couple this with their reputation for relative docile nature and ease of breeding it’s easy to see why this species is so popular in captivity.

They occur in the forest regions of Brazil and are a relatively common tarantula. They are commonly bred in captivity. A big spider, with huge fangs and urticating hairs (they flick them from their abdomen with their legs) they should be handled with only when necessary and with care – even though considered a docile species. They are usually set out in the open, so make a great showcase species to keep. They are also easy to fatally 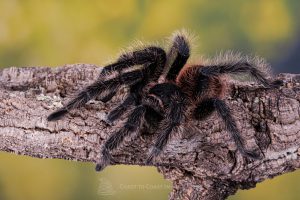 damage if dropped, a small fall of only a few inches will burst a heavy bodied spider such as these.

A relatively large enclosure should be given for an adult, around two feet long will suffice. Use a damp creating substrate such as coir, with a hide (don’t be surprised if it doesn’t use it) and a small water bowl. Maintain a temperature of around 24-26C, and a humidity of around 75%. 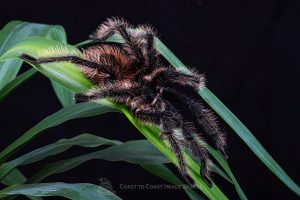 They are greedy feeders, but please ensure they are not over fed – no more often than once a week, perhaps every ten days as an adult. They will take almost any food they can overcome – locusts, cockroaches, crickets etc. Some keepers give them a sporadic treat of a pink mouse.