Vinegaroons are an arachnid occurring throughout the world (except Europe and Australia), in sub-tropical and tropical regions. The are a burrowing species often found in burrows under rotting 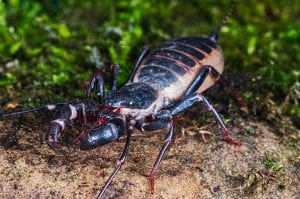 logs and the like. They are named Vinegaroons due to them releasing acetic acid as a defence, which gives them a vinegary aroma. Another common name is Whip Scorpion. They do not use the full eight legs for walking, the front two are used as antennae-like sensory organs. All species also have very large scorpion-like pincers – each pincer has an additional large spine. They have a pair of eyes at the front, three on the side of the head.

These are very easy to keep. Maintain a temperature of around 25-28C, a deep layer of damp substrate such as coir, leaf litter etc. A hide such as a log will provide an area for them to burrow – they dislike bright sunlight. Spray the whole vivarium daily to maintain higher levels of humidity. They eat 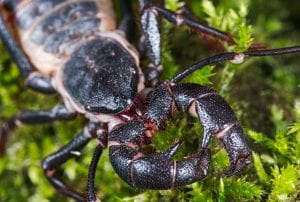 a wide variety of insects, and are fascinating to watch as they eat. There is one species (at least) that requires drier conditions – be aware of this when providing conditions in captivity. This species, Mastigoproctus giganteus needs a drier substrate and only localised humid area – usually just in their burrow.